Lass of Petties Mills, Port Atholl & The more discreet, the welcomer
from the Balcarres Lute Book (1695 ­ 1702)

​With 45 concerto performances to date, she has built a reputation as a versatile soloist with premieres of contemporary Australian concertos as well as many performances of the ever­popular Mozart and Handel harp concertos. One highlight was performing as a soloist with the Australian Youth Orchestra at the Adelaide Arts Festival in 1992.

After making her solo debut at the age of 15, she has performed many recitals and toured Australia as a soloist.

In 2012, Verna was awarded a grant for her sold­out multi­media performances The Harp In Nature which showcased stunning images of the Australian landscape set to works by Australian composers. This recital was also performed at the World Harp Congress in 2014.

She has worked and recorded with various orchestras such as the Singapore Symphony, the Sydney Symphony, Australian Opera and Ballet Orchestra, Adelaide Symphony and Tasmanian Symphony and spent 10 years as principal harpist with the Australian Youth Orchestra.

Verna is a passionate educator. Not only does she teach at the Sydney Conservatorium High School, other private schools and at her busy private studio but she also directs the Sydney Harp Eisteddfod, organises harp weekends, workshops and harp camps, and presents lectures at various harp festivals.

In 2015, Verna added the Baroque triple harp to her list of harps and has already performed with several early music groups such as Sydney Consort. Her harp was made in 2008, based on a picture of a triple harp from the 1620s.
10 February
​Q Trio 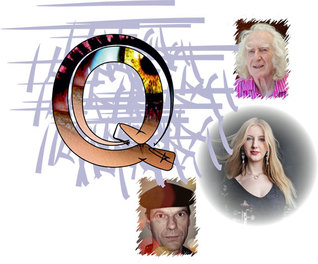 Peter Stone is an Artist and musician. He has performed in many countries around the world, UK, France, China, SE Asia, and toured the Pacific on the PO TV 'Love Boat' series.
He has had painting exhibitions in the UK and Australia. Peter composes and plays piano and flute. He lectures at university programs on the arts in Australia, Hong Kong, China and Dublin. His book 'Travelling to Freedom' was a best seller.

Emma Greenhill is a Sydney-based violinist and composer currently studying at the Conservatorium of Music. She has performed her own compositions twice at the Sydney Opera House and played at hundreds of weddings, performances and events all around New South Wales. She has appeared on the Voice Australia, Xfactor Australia and The Footy Show and played live with Sony recording artist Nathaniel Willemse, and award-winning artist, Delta Goodrem.
17 February
The Sydney Camerata
Mathisha Panagoda (violoncello) &
Ella Jamieson (violoncello, pianoforte)

Sonata in Bb for Two Cellos, RV45 - Antonio Vivaldi (1678 - 1741)
Largo, Allegro, Largo, Allegro
'Nocturne' for solo piano - Frédéric Chopin (1810 - 1849)
'Hello' arranged for cello and piano - Adele Adkins MBE (1988 - )
Cello Sonata No. 1 Op. 38 - Johannes Brahms (1833 - 1897)
1st Movement - Allegro non troppo
'Isn't She Lovely' arranged for cello and piano - Stevie Wonder (1950 - )
Mathisha Panagoda was born in Sydney, Australia and began playing the cello at the age of four.  He completed his tertiary studies at the Sydney Conservatorium of Music graduating with a Bachelor of Music (Honours) and a Juris Doctor in law from the University of Sydney. With the assistance of a BBM Award and Ars Musica Australis Fellowship he pursued further musical studies in the UK.

In Australia Mathisha has performed in the Sydney, Melbourne and Queensland Symphony Orchestras. In 2008 he founded the Sydney Camerata, a chamber orchestra awarded the 2010 Musica Viva Award for Chamber Music and of which he is now the Artistic Director. In 2012 his string quartet were Musica Viva Australia's 'Rising Stars' ensemble and maintain a busy concert series in Sydney.

Mathisha has performed and toured internationally with the Aldeburgh World Orchestra, YouTube Symphony Orchestra and Australian Youth Orchestra. He has performed at a number of festivals throughout Asia and Europe and has now completed two solo residencies at The Banff Centre in Canada. Since 2010 he has been a young artist with the Britten-Pears Program in the UK and returns regularly to perform with the Britten-Pears Orchestra and Aldeburgh Strings.

In 2014 Mathisha was nominated for the Young Australian of the Year. He currently works as a lawyer at Carroll & O'Dea (specialising in Entertainment Law, Compensation and Litigation) and the Arts Law Centre of Australia (Pro-bono) whilst maintaining a busy performance schedule. In 2015 Mathisha was appointed to the board of The Song Company, Australia's professional choral ensemble.


A musician with exceptional passion and charisma, Sydney-based Ella Jamieson is a pianist and cellist who specialises in solo and chamber performance. A graduate from the Sydney Conservatorium of Music, Ella balances a demanding and varied performance schedule, including concert hall recitals, television appearances, radio broadcasts, and studio recordings. She also frequently performs as a soloist at wedding celebrations and private events held at venues including David Jones and the Sydney Convention Centre. This extensive musical experience has established her as one of the most accomplished young musicians in Sydney.

With a repertoire ranging from Chopin, Debussy and Gershwin to Rihanna and Nirvana, Ella is an incredibly versatile performer. She currently holds a residency at The Menzies in Sydney's CBD, as well as performing on weekly basis on 'The Matty Johns Show' on Channel 7.

​
The Sydney Camerata was founded by Mathisha Panagoda in 2008 and has since performed throughout Sydney at venues including the City Recital Hall, Sydney Conservatorium, Seymour Centre, Joan Sutherland Performing Arts Centre and The Independent Theatre. They have also undertaken tours to North Queensland and Papua New Guinea. Sydney Camerata have performed on ABC Classic FM's Sunday Live and broadcast on Fine Music 102.5. Recently they have collaborated with the Sydney Chamber Choir, Bel A Cappella and performed with Nick Russoniello at the Bellingen Festival. The ensemble is highly versatile and aims to provide important performance opportunities for aspiring young professional musicians. It supports young composers through its annual composition fellowship program and endeavours to bring classical music to new audiences. More information is available on their website www.sydneycamerata.com or various social media channels including YouTube, Facebook and Twitter.
24 February
Pastor de Lasala (organ)
​Sacred Heart Mosman
Mosman Uniting
St Joseph's Neutral Bay
St John's College (within the University of Sydney)
​
Prelude and Fugue in A Minor BWV 543 - J.S. Bach (1685 - 1750)
Chorale prelude on Wie schön leuchtet der Morgenstern - J.L. Krebs (1713 - 1780)
From 7 pièces (1898) - Théodore Dubois (1837 - 1924)
i. Interlude
ii. Marcietta
iii. Cantique Religieuse
iv. Marche-Sortie
Postlude on "Tell out my Soul - Denis Bédard (1950 - )
Andante con moto op 16 no 1 - Alexandre Guilmant (1837 - 1911)
Sortie in C from l'Organiste moderne Bk 4 - A. Lefébure-Wély (1817 - 1869)
Born in Sydney in 1958, Pastór de Lasala was educated by the Jesuit Fathers at St Aloysius' College and then at the University of Sydney where he completed his tertiary studies, majoring in French, Latin and Music. He studied organ with Norman Johnston. He served on the Committee of the Organ Society of Sydney, as secretary and then as Deputy President, and is presently a Director of the Organ Historical Trust of Australia (OHTA). Pastor visits France annually and has played a wide range of French instruments from the 17th - 20th centuries including those at the royal chapels of Versailles and Fontainebleau. He has given numerous solo recitals all around France, including twice at Notre-Dame de Paris, and at the cathedrals and basilicas in Carcassonne, Bourges, St Pons, Béziers, Narbonne, Lavaur, St Maximin-en-Provence, St Raphaël and Albi.
​
Pastór plays the harpsichord and clavichord and has made a number of live radio recordings on this latter instrument. He has been organist at Sacred Heart Church, Mosman since 1978 and concurrently at Mosman Uniting Church, St Joseph's, Neutral Bay and St John's College (within the University of Sydney) since 2008, 2012 and 2014 respectively. He has recorded six CDs, which include the 1890 Hill & Son organ at Ss Peter & Paul's (Old) Cathedral, Goulburn, two on the 1882 Forster & Andrew's organ at Sacred Heart, Mosman, the 1929 Möller organ at Mosman Uniting Church and the 1890 Puget organ at Kincoppal-Rose Bay for which he is the Australian Consultant. Pastor had published transcriptions for organ and harpsichord with Saraband Musicis currently collaborating in the publication of the complete organ works of Michel Corrette both in France and in the USA.