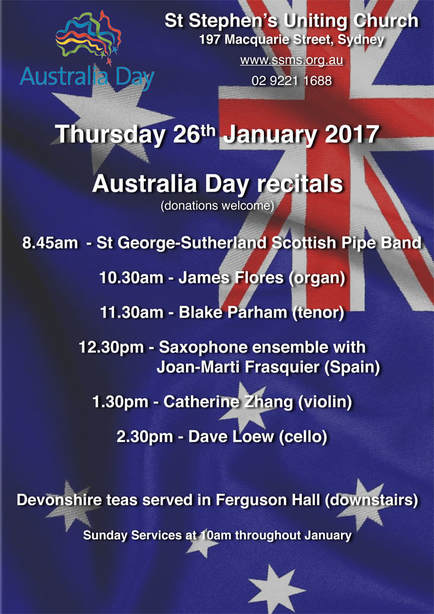 ​Toccata in F Major (BWV 540) - Johann Sebastian Bach (1685 - 1750)
Air from Water Music - George Frideric Handel (1685 - 1759)
Alla Hornpipe from Water Music - George Frideric Handel (1685 - 1759)
Master Tallis's Testament - Herbert Howells (1892 - 1983)
​Final (III) from Sonata No 1 - Alexandre Guilmant (1837 - 1911)
James Flores is an organist based in Albury, NSW. His musical endeavours began with piano lessons under the guidance of his aunt, Aurora Flores, and during his schooling years was a regular participant at local eisteddfodau. James became interested in church music and the organ in 2011. He began studies on the organ under the instruction of Benedict Wilson and then Allan Beavis from 2013. In the last 6 years he has been sub-organist for the Schola Cantorum at St Patrick's, Albury, where he was actively involved in the Schola's liturgical activities, concerts and the production of three CDs. James has also been offering numerous organ recitals within the Albury region in the hope to revive organ music in the local area. He completed an IT degree from the University of Wollongong in 2008 and currently works for Fairfax Media. Musically, he has attained the AMusA (piano and organ) and church music qualifications from the SCSM (TAS) and the Guild of Church Musicians. James is currently serving as Organ Scholar for St Matthew's Church, Albury.
11.30 am - Blake Parham (tenor) &
Johnathan Wilson (pianoforte)

​Waltzing Matilda - arranged by Selim Giray (1970)
Poem by Banjo Paterson
Letters from a Black Snake - George Palmer (1947)
Words taken from Ned Kelly's letters.
I. Sergeant Babington
II. I Have Been Wronged
III. Bullock Creek
IV. The Murder
V. In Conclusion
Blake Parham is currently a music lecturer at the Avondale Conservatorium, the Wollongong Conservatorium, and a PhD candidate at the Sydney Conservatorium. He has appeared on stage as 'Toby' in George Palmer's Cloudstreet (SOSA - Workshop), 'Basilio' in Le Nozze di Figaro and 'Pluto' in Orpheus in the Underworld (Rockdale Opera), 'Goro' in Madama Butterfly (Opera Projects, Sydney), and 'Tinca' in Il Tabarro. Blake has appeared in concerts with the University of St Andrews, Dundee Cathedral, Polish Musicians Association, Albert Hall Canberra, Adelaide Philharmonia, Pacific Opera, Illawarra Choral Society, and the Macquarie University Orchestra. Awards include the George Boland Scholarship, the 2014 5Mbs Young Virtuosi Award, and an Arts Grant to study with Peter Coleman-Wright.

Johnathan Wilson recently returned to Australia after being awarded a Doctorate of Music by the University of Montreal. Prior to this he studied at the Guildhall School of Music in London with Joan Havill. He has won prizes in several competitions including the Hastings International Piano Concerto Competition (1st Prize) as well as major prizes in the Australian National Piano Award in Shepparton and the Bromsgrove International Soloist Competition, and performed with several orchestras include the European Union Chamber Orchestra and Finchley Chamber Orchestra. Jonathan particularly enjoys collaborating with singers and instrumentalists. Recently he was awarded the Best Pianist prize at the Mietta Song Competition in Melbourne and in 2017 he is the Melba Opera Trust repetiteur scholar.
12.30 pm - Saxophone ensemble with Joan-Marti Frasquier (Spain)

​Violin Concert in D major, Op. 35 - Pyotr Ilyich Tchaikovsky (1840 - 1893)
1. Allegro moderato
2. Canzonetta: Andante
3. Finale: Allegro vivacissimo
Catherine Zhang is currently 13 years old. She started playing piano when she was 5 years old, in Brisbane, Queensland. When she was 8 and half, Catherine started playing violin with Professor Peter Zhang. At the age of 10, Catherine was accepted into the Conservatorium of Music's Rising Star Program where she learnt with Ms. Janet Davies and frequently played in the Saturday performances. She then switched to Mr. Carl Pini, former London Symphony concertmaster and Music Director of The Australian Chamber Orchestra, when she was 11. In 2015, Catherine was accepted into the Conservatorium of Music High School, where she continued her musical studies with Ms. Nadia Monastyrsky. In July 2016, she attended a Music summer school at New York where she studied with Mr. David Fiedler. She studies with Mr. Bruce Yang currently and will be attending Santa Sabina College this year.
Catherine has received numerous scholarships locally and internationally for her music study. She is the prize holder for Sydney and Ryde Eisteddfod and local Music Festival etc. She won the 4th place at Asia-Pacific Violin Competition (Taiwan) in October 2015. Catherine is the leader of a quadruple violin group which she and her friends created, and they perform in various concerts all around Sydney

Molly Sung is a piano teacher and accompanist at Santa Sabina College, Strathfield. She graduated with a Bachelor of Music degree, majoring in piano from the Ewha Womens University in Korea.
2.30 pm - David Loew (violoncello)
​
​Suite No. 3 in C Major BMW 1009 - J.S. Bach (1685 - 1750)
Prelude
Allemande
Courante
Sarabande
Bourree 1 and 2
Gigue
DAVE LOEW is an International cellist spanning a forty year career performing in Australia and Britain with his albums selling in numerous countries around the world. DAVE has played the cello (which became a lifelong love and passion) from the age of six in one of the world's toughest industries, that of a solo performer on commercial records. His many genres of music are drawn from his exotic family legacy of classical, jazz and dance artists. Dave's formative 'cello days were spent in Kenya, his birthplace near the Serengeti plains and the vibrant sounds of animal wildlife, both his parents were show business star personalities in London's West End, who had migrated from a blitzed wartime London to start a new life in Nairobi.

Dave has now released five top selling albums; his latest is THE BEATLES AND FRIENDS, along with the DAVE LOEW COLLECTION also offering ROMANCE OF THE CELLO; AT THE MOVIES and CLASSICAL CELLO.

DAVE has worked with many top London ensembles including the London Symphony Orchestra where Andre Previn acclaimed his solo playing for Previn's world premiere of the musical Every Good Boy. He has also played in numerous, famous recording studios such as Abbey Road, on major classical and pop albums over the years working with legends such as Elton John, Cliff Richard, Petula Clark, David Essex and opera stars such as Pavarotti, Sutherland and Caballe. He has also played solo 'cello for shows in the West End and Australia, such as Andrew Lloyd Webber's Cats and Song and Dance, for which he was lauded for his solo playing. Extensive playing was also part of Dave's kaleidoscope of experience working for film moguls such as John Williams, Jerry Goldsmith, Henry Mancini and Roy Budd on such iconic movies as the original Superman, The Omen, Victor Victoria, James Bond, The 39 Steps, and many more.

Dave was fortunate to study with the Internationally renowned teacher and cellist Christopher Bunting for twenty years in London, while there he also created and marketed his own record label - SAFARI IN CLASSICS in 1999 creating both national fan clubs and sales , which went on to sell several hundred thousand albums in Britain and internationally. Fans include Stella McCartney, Rob Lowe and Edward Fox as well as people from all creeds and walks of life.

Dave has been principal cellist with the Australian Ballet and Opera in Melbourne, the Melbourne Symphony and Sydney Symphony Orchestra. Dave recorded DEBUT his very first solo album in Sydney for Polygram in 1987 which quickly went to Platinum sales and is still in demand today!

After returning to Australia in 2011 he released his Album Collection and undertook extensive appearances nationally which propelled the albums to the top of the best sellers list. Dave has of course given many recitals on radio and in concert, and he retains his love of "core" classical repertoire and plans to record three of the immortal J.S. Bach solo cello suites this year.

In 2015-2016 Dave continues to bring his popular collection to both unorthodox venues such as designer brands and malls as well as concerts and tours with his new and innovative "Pop Up Concerts" in Australian cities. These will prove to be a talking point in the media arts!

Further recordings in the pipeline include the legendary JS Bach solo suites in a tribute to Dave's mentor, the late cello icon teacher Christopher Bunting who himself had studied with the great Pablo Casals, discoverer of the cello suites.

A release planned is in keeping with Dave's eclectic tastes, tribute to some of our greatest crooners Frank Sinatra, Matt Monro and others to divas such as Maria Callas and Mario Lanza.