Three songs for voice, viola and piano - Frank Bridge (1879 - 1941)
1. Far, far from each other
2. Where is it that our soul doth go?
3. Music when soft voices die.
Soprano Ayșe Göknur Shanal studied at the Royal College of Music in London and was an adjunct member of the Lindemann Young Artist Development Program at the Metropolitan Opera (New York).

Ayșe has won many prestigious awards and scholarships including the Australian Singing Competition, Opera Foundation Australia's Metropolitan Opera Award (New York) and the Sonderpreis der Loreley-Festspiele at the Neue Stimmen International Singing Competition (Germany). Ayșe has appeared as a principal artist with Opera Australia and Turkish State Opera. She has also performed at the Aldeburgh Festival (UK) and the Sydney Festival, and major symphony orchestras in Australia.
​
She has released two CDs, Love and Life, with Taslig Records and Çanakkale-Gallipoli Songs, with Wirripang.

A sensitive and highly versatile pianist, Dewi Lui graduated with a Master of Music degree in Piano Accompaniment from Sydney Conservatorium of Music. Her teachers included Gerard Willems, Clemens Leske, Phillip Shovk and David Miller. She has collaborated with renowned soloists including Geotz Richter, Michael Halliwell, Julian Smiles, and Yvonne Kenny. Dewi was awarded third prize in the Piano Accompaniment category at the International Wales Piano Festival 2016 and was privileged to take part in the Voice and Collaborative Pianist Program 2015 at Munich under the Australian pianist scholarship. Dewi has played for many choirs and was appointed as principal accompanist to the Sydney Male Choir in 2013.
14 April - Good Friday
No lunchtime recital 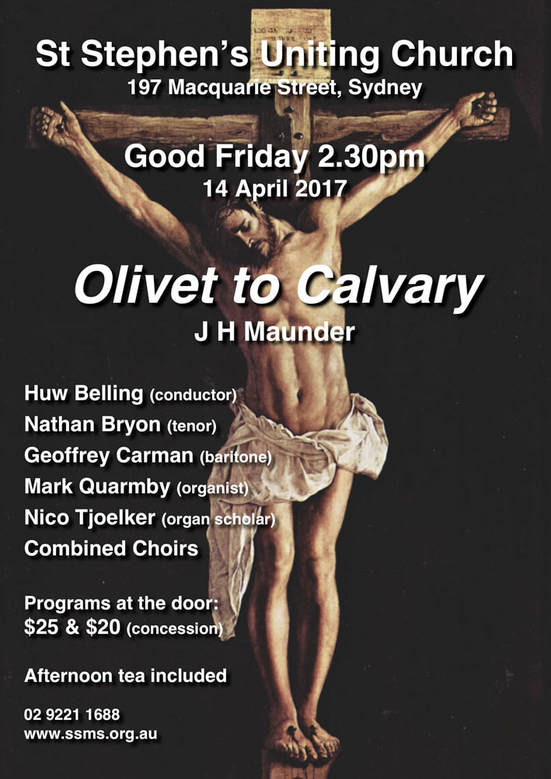 Solo alto saxophone:
Black & Blue (1995) - Barry Cockcroft (1972- )
Iris Li (b.1996) was born in China and began her clarinet studies at the age of 6. She was one of the leaders of the school's marching band which was part of the military band of the People's Liberation army of China. When Iris worked at the school's marching band, she participated in competitions and performances more than 20 times and won the 1st prize 5 times (e.g. Forum on China-Africa Cooperation Beijing 2006, Shanghai Spring International Music Festival 2009).

When she was 11, she started playing saxophone. Since Iris began her saxophone studies, she has participated in masterclasses and performances with different saxophonists from different countries (e.g. Detlef Bensmann, Shyen Lee, Sergey Kolesov, Anna Stepanova, Fernando Ramos). Iris moved to Australia from Beijing, China in 2014 and graduated from the University of Sydney foundation program last year. She will continue her saxophone studies at Sydney Conservatorium of Music this year.


Vicky He began piano at age six and has since had varied and extensive performance experience in China. She now is a student at the Sydney Conservatorium of Music currently studying for the Bachelor of Music (Studies), and in Piano with pianist Paul Rickard-Ford.
​
​She completed the top grade in the Arts Grade Examination Of China when she was in middle school, and was awarded first place in the International Piano Competition of Beijing. In high school, Vicky participated in three concerts with her music teacher Mrs. Xu. She was invited to take part in the piano competition in Taiwan and Guang Zhou, then she awarded first place twice again. After she finished her high school life, she came to the Sydney for further study. She studied piano with Mr. Wu as part of the University of Sydney Foundation Program.
28 April
Christopher Trikilis (organ) [Melbourne]

Cantilene for the organ - Christian Hellemann (1900-1986)
​
Fanfare - Jacques-Nicolas Lemmens (1823-1881)
One of Australia's leading young organists, CHRISTOPHER TRIKILIS is a Melbourne-based musician. Commencing piano lessons at a young age, he completed music studies at the University of Melbourne studying with John Mallinson (organ) and Mark McGee (piano) while also being Organ Scholar at St Patrick's Cathedral Melbourne. Maintaining an active performance schedule both as soloist and accompanist, Chris has performed across Australia, New Zealand, Europe and North America. He is a former Vice-President of the Society of Organists Victoria, and was acting editor of nationwide 'Organ Australia' magazine in 2011. Christopher is responsible for a number of pipe organs installed in recent years across Melbourne, has also featured on numerous recordings, including DVDs for the Organ Historical Trust of Australia, and the CD "Diapason" on the Move Records label. Currently, Christopher is Organist and Director of Music at St Patrick's Church in Mentone (with its heritage-listed 1862 Nicholson organ), Music Tutor to Corpus Christi Seminary in Carlton, and on staff at St Kevin's College in Toorak.